If you’re still in the dark (without your glowsticks) as to who exactly is behind the well-versed  SKAM Artist DJ Crew…then you’re missing out on the brilliant mind that created the foundation for this musically talented clique.

Sujit Kundu, the skilled CEO of SKAM Artist, has been featured in the New York Daily News, New York Post’s Page Six, ABC Radio, MySpace, Manhattan, Blackbook, E! News, InTouch Weekly, OK! and Remix Magazine… just to name a few.   Unlike some entrepreneurs, he didn’t grow up dreaming of being an exec in the music industry, it sort of happened naturally when his buddies began throwing rave parties in the 90’s, in Orange County.  Sujit saw an opportunity to increase the success, attendance and profitability of these events… and thus, the SKAM Artist adventure began…

Sujit’s events started small, but before high school graduation rolled around, his raves were drawing crowds of up to 4000 party-goers.  That success grew quickly and he began  promoting large-scale performances that featured some of hip-hop and R&B’s biggest acts at the time, such as Warren G, Cypress Hill, KRS-One, and Mobb Deep.

A large contributor to his success is his education in Economics and Accounting, from the University of California in Santa Barbara, adding practicality and intellect to his witty, street-smart approach to the music event business.  By the time he graduated from UCSB, Sujit had expanded his event promo business into radio and mix shows, teaming up with the music director of LA’s Power 106 to form a production and DJ management company.  Together, they landed a top ten radio hit with Shade Sheist’s “Where I Wanna Be,” proving this duo was destined for success in the music industry.

Meanwhile, Sujit also worked in radio promotions at MCA Records, his first experience working for a major record label.  A few years later his production / management company disbanded, with his partner taking over the production arm and Sujit running the DJ management side.

Being that SKAM was a bit ahead of it’s time in the DJ world — initial jobs only paid in the hundreds — and the management business wasn’t a big source of revenue.  But since the advent of the ‘mash up’ DJ as a celebrity… times have changed.  Sujit’s clients now command fees in the five figures and SKAM employs a group of professionals, with offices in both LA and New York, actively managing a roster of over 60 DJ’s, including these well-known names; DJ Vice, Jermaine Dupri, Lil Jon, Sky Nellor, Nick Cannon, Samantha Ronson and Bad Boy Bill.

Sujit continued to advance in his career, signing on with Universal Records as the National Director of Radio and Crossover Promotions in 2005, before moving on to Motown in 2011 as Senior VP of Crossover and Video Promo.  Currently, Sujit is SVP of Crossover Promo at EPIC Records, doing what he does best, working with talented acts such as Megan Trainor, Ciara, Travis Scott, Future and Tamar Braxton.

Q & A WITH SUJIT KUNDU

Q:  What does your normal day or night at the SKAM office look like?
A:  Well I have two jobs.  I am mainly in NYC working at Sony Music’s label, EPIC Records.  My day consists mostly of calls and emails from 8 AM to 9 or 10 PM.  The SKAM office is in L.A. and is a house with a backyard.  We really have a family environment going on there!  We have backyard barbecues on Fridays, and when I am there we are always doing stuff together.  It’s a family environment.
Q:  What can prospective attendees expect at your 40th Birthday Party at the Dream Hotel in NYC and which SKAM DJ’s are in the lineup?
A:  (laughing) Not telling!  You will have to come and find out.  We are having a hotel take over!  Every part of the hotel, from the pool to the lobby, is going to be streaming with people.  It is going to be one big party, there is no set agenda.  Its cool, a lot of these people that will be there, I have worked with for 15+ years. (chuckles) Tuesday is gonna hurt…
Q:  What’s your all-time favorite nightclub in the world?
A:   I don’t have one.  It’s more about the people who you are with.  Sometimes you are surprised how the night turns out and how great the night was.  It doesn’t have to do with the club, its the people.  (yep..this guy just ‘gets it’…no wonder he’s successful!)
Q:  What’s the craziest experience you’ve had at work with any of the SKAM Artists?
A:  I like to keep the artists privacy, so I won’t say, but… I have seen it all.
Q:  On a scale of 1 to 100, how would you rate the level of excitement in this industry?
A:  100, I don’t ever feel like I am going to work.
Q:  Describe your life with the name of a show or movie.
A:   Entourage
Q:  If you were a superhero, what would your superhero name be and what are your powers?
A:  The Joker! Because everyone always asks, “Where did you get these wonderful toys?”
Our hats off to this hardworking entrepreneur for his success in the entertaining world of music!  Happy Birthday to you Sujit Kundu!  Cheers to you and best wishes for tons of continued success!
All are invited to celebrate with this awesome crew in NYC at the big birthday bash on August 17, 2015, at the Dream Hotel Downtown.  For discounted hotel room bookings at Dream for the big night, click here. 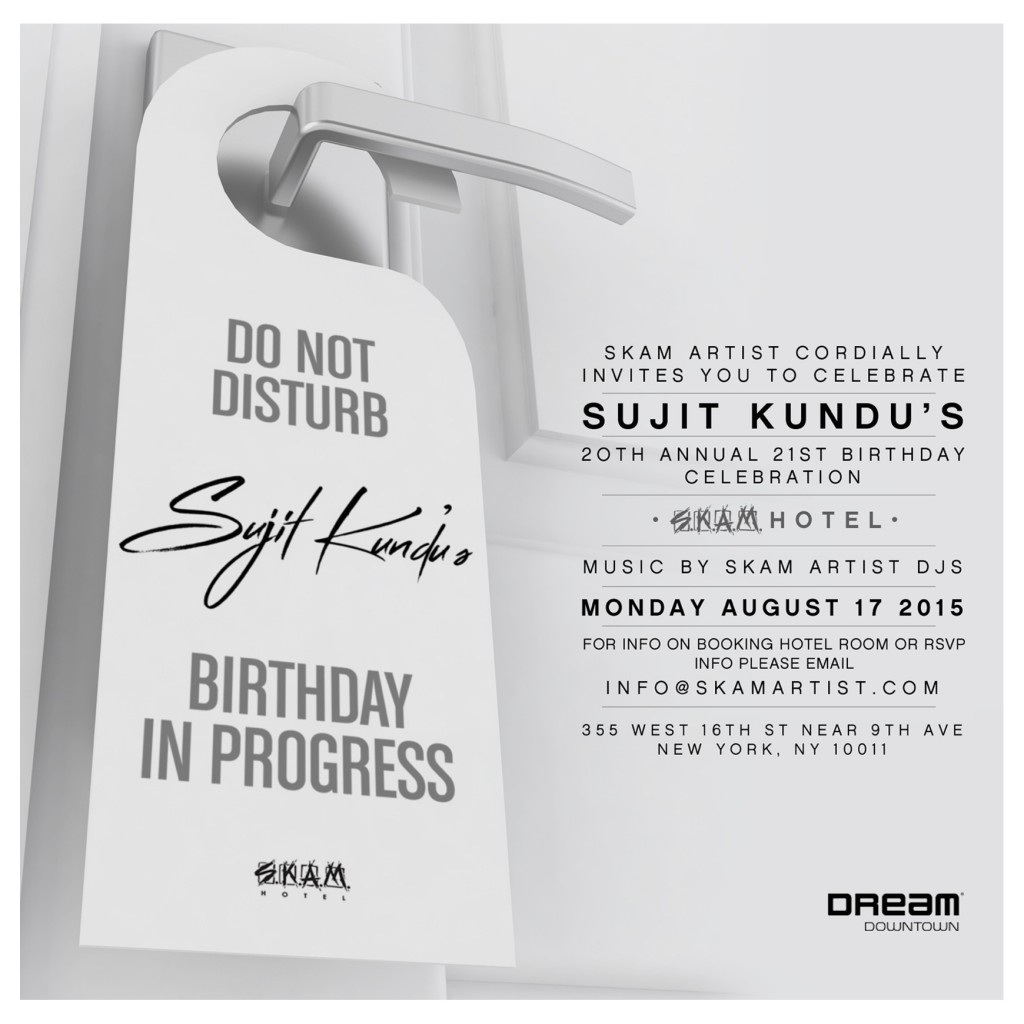